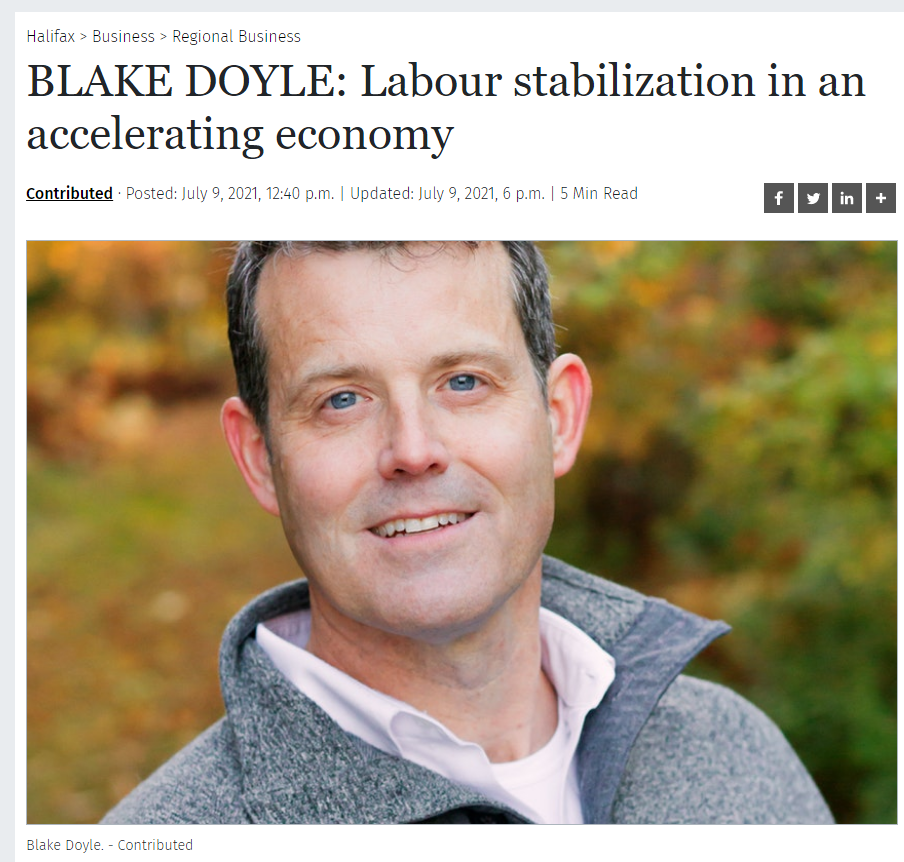 To quote a former Premier “our economy is on a tear”. In fact, the economic engine has been on a tear for over a decade. We reluctantly endured a hard stop when ‘most’ economic activity was artificially suspended for several quarters. But today, the tear has caused a rip through an engine of our growth, the labour pool.

Our Islands recovery is of little surprise, we can observe recovery patters elsewhere, for example the US who leapfrogged Canada in vaccination and reopening. As our boarders open, a supressed energy is being predictably unleashed as businesses reopen, travel resumes and hiring occurs.

All stock indices are achieving record highs as companies benefit from reopening, through our local lag we have the benefit to anticipate what will occur next. The economy wants to ‘run’, but access to labour has become a ‘bit’ to our pace.

PEI fared even better than sister provinces, registering the least amount of economic loss according to the Atlantic Provinces Economic Council. Not surprisingly the hardest hit industry was tourism, down 60 per cent year over year 2019/ 2020, with restaurants also adapting but down 60 per cent. On PEI tourism accounts for 7 per cent of employment and 4 per cent of our Gross Domestic Product.

Coupled with an unplanned pandemic, structural changes to our labour force continue. Our work force continues to age and large parts of the labour force remain displaced by policies. As of June 20th 16,910 Island recipients remained on EI. The largest impacted age groups were 25-34 and 55-64 years of age; important contributors to our economy.

In contrast, employers continue to struggle to find the necessary labour through a recovering economy. Supporting this disconnect, the provincial government increased its focus on foreign labour immigration with 89 per cent of all immigration directed to labour. Retention remaining the paradox of this equation.

Economic growth paired with labour constraints is not unique to PEI, this remains a challenge throughout North America. Monetary policy architects are sensitive to this divergence, where some companies are making unprecedented profits while high-contact employment is not recovering. Until employment participation is universal; the economic fuel of low interest rates will remain, in hope of stimulating greater labour market engagement.

Despite the demand for labour, wages are falling against inflation. Energy, housing, transportation; key components of the consumer price index are rising faster than wages. In PEI April weekly earnings decreased 3.5 per cent compared to the same period one year earlier. Prices rise, as earnings stagnate. Canada recorded 3.6 per cent inflation in May as PEI achieved a whopping 6.0 per cent inflation rate.

The last element of a uniform and balanced recovery will be increased employment and wage growth. Many feel we are not near this phase of the cycle yet, for our seasonal Island economy the test will be comparing year over year engagement through our Fall/ Winter only then can we test the validity of recovery.

Read this article on the Guardian.